Clinical research on NKT cell-targeted cancer immunotherapy using α-galactosylceramide-pulsed dendritic cells (DCs)* was carried out at Chiba University Hospital between the 2000’s. The subjects were 17 patients with advanced non-small cell lung cancer at stages IIIb and IV, who were resistant to surgery, radiotherapy, and anti-cancer agents. The median survival time with the initial treatment only was approximately 18.6 months, which was more than four times that of the 4.6 months with best supportive care.
Interferon-γ (IFN-γ) production as an index of NKT cell activation was shown in approximately 90% of patients who participated in this clinical study. However, when the subjects were divided into two groups, those with and without IFN-γ-producing cell counts at least twice as high as before the treatment, the statistical difference of increase in survival time was found in between the two groups. Of the 17 subjects treated using α-galactosylceramide-pulsed DCs, 10 subjects (approximately 60%) showed increases in IFN-γ-producing cell counts to at least twice the levels before treatment, and the median survival time of these subjects was 31.9 months, which represented a marked increase.
Since obtaining the results of this clinical study, NKT cell-targeted cancer immunotherapy has been authorized as Advanced Medical Care B by MHLW.
Reference can be made to http://www.mhlw.go.jp/topics/bukyoku/isei/sensiniryo/kikan03.html

*: The novel product which AMBICION develops under the Pharmaceuticals and Medical Devices Law is "RK ligand-pulsed APCs". The ligand, APCs and culture conditions are different from those used with α-galactosylceramide-pulsed DCs. 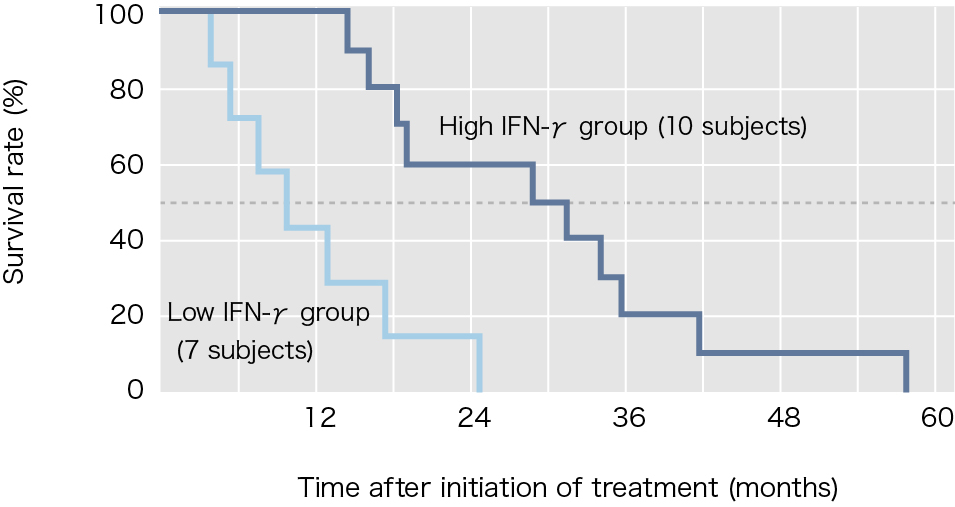